The 241-year-old Petit Théâtre de la Reine, which only gives performances once every two years, is being lovingly restored by a conservation team at Versailles

Before the French Revolution that ultimately led to her untimely death, Marie Antoinette was a great lover of the dramatic arts. After her coronation in 1774, her husband, King Louis XVI, put the royal in charge of organising entertainment for the court and, it is said, the last Queen of France regularly put on plays in the gallery of the Grand Trianon and the orangery of the Petit Trianon.

Four years into her reign, however, she grew tired of the temporary stages that were knocked together for her performances. So, in 1778, Marie Antoinette commissioned architect Richard Mique to build her a real theatre.

Hidden away amidst the foliage of the Château de Versailles gardens, the Petit Théâtre de la Reine was completed in spring of 1780, and quickly became Marie Antoinette’s private refuge away from court protocol. It was here, in 1785, that she gave her own last performance on stage, as Rosine in The Barber of Seville in front of its author, Beaumarchais.

At the time of the Revolution, the theatre was deemed worthless and lay empty until Napoleon Bonaparte took possession of it in 1809, adding to its interior a neo-Roman imperial box in the shape of a military tent and new wallpaper adorned with his emblematic bees. Then came Louis-Philippe, who gave the theatre a new 19th-century red velvet look complete with crystal chandeliers, then Napoleon III and the Second Empire. Sadly, by the end of the Great War the theatre had fallen into a state of disrepair. 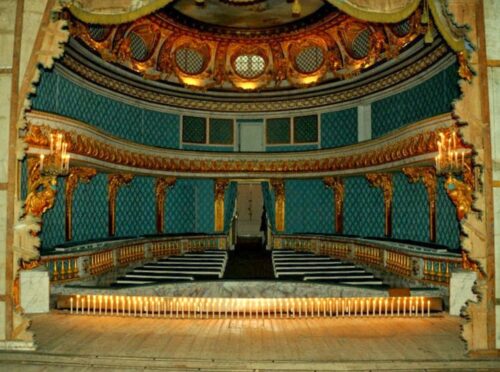 Today, a conservation team at Versailles are working hard to bring the historical gem back to life through painstaking conservation. With visitors kept away by the pandemic, the team have already finished the restoration of the stage curtain, hand-stitching the striking cobalt-blue linen together using the original techniques.

Now, the team, led by chief curator of heritage at Versailles, Raphaël Masson, who describes the theatre as ‘a miracle of conservation’, are using the château’s original inventory to rebuild other parts that have been lost over the years. This includes machinery that causes a tree to rise from a trapdoor and three sets – a simple interior, a forest and a temple of Minerva – the latter being the oldest intact decor in the world, dating back to 1754 – ‘our own Mona Lisa,’ said Masson.